A topology, by definition, concerns itself with the way in which “constituent parts are interrelated or arranged”; by extension, it presumes a fluidity in categorising these parts, equally discrete as they are continuous, and fulfilling both intrinsic and contextual roles. Mathematically the word also applies to the study of geometric properties that remain unchanged by deformation and contortion. Taken together the definitions constitute a paradox: an object’s ontology now displays both immutability and variability, neither quite assured of its relationship qua object. And it is this beautiful, frustrating paradox that structures and shapes our viewing of most of reality, our perceptions and interpretations, underpinning a world of constants and change, foregrounds and backgrounds, content and context; simultaneously contradictory and consensual affairs that nonetheless continue to define the very act of seeing the world.

Seeing — or rather hearing, for the image has always been cinema’s ascendancy, its stately contours immortalised through visible presence: first through its relation with the absence of sound in the silent film, then within the Technicolor advent, and further on, through bigger and better and busier contestations for size, shape, supremacy; IMAX cameras, crystal-clear fetishism, etc. Sound on the other hand acquires a bystanding role, accompanying its sightlier, better cousin in the art of meaning-making but frequently reduced in its artistic dimensions. Images and stills are celebrated of course — from Griffith to Eisenstein, Godard and Spielberg — as traces of cinematic history, whereas sound, the invisible undercurrent, rarely broaches this lineage, confined to ahistorical footnotes, severed from politics, culture, context, its content serving as skeletal context to be thanklessly grafted onto the merrymaking of light and colour.

Hence — a topology of sound, wherein this thankless realm finds itself reinvigorated by the very act of surveying it, renewed through precisely its existence within the quotidian, celebrated for the majesty this very existence proffers of its constituent elements: natural sounds, man-made ones, and all else both, neither, or in-between. Such is the focus that gently comes into play in the enchanting Topology of Sirens, the debut feature from American filmmaker and musician Jonathan Davies, a micro-budget film whose own status within the indie circuit mirrors that of its subject. Though indebted to the circuit’s penchant for ambiguous circularity (a trait that frequently sees the uninspired implode in existential anguish), it uses this circularity to its advantage, literally framing it as modus operandi for mapping out the journey ahead. A mystery without a solution, a signifier without a signified; like many of its affective ilk, Topology of Sirens forges from its nebulously postmodern condition a distinct voice of contemplation, a quiet romanticism for beauty and parsimony amid the chaos of uncertainty, punctuating the search for Shangri-La with little, equally utopian moments of reverie.

The narrative of Topology of Sirens can be divided into two halves: the first concerning a discovery of some old cassette tapes, and the second regarding a myth construed out of this discovery. In the first half Cas (Courtney Stephens) moves into her deceased aunt’s home in the quiet suburbs of Los Angeles. Her day job appears to be as a sound engineer, fiddling with recordings and modifying them to pre-assigned ends (the specifics of which we aren’t privy to). The neighbourhood proves generally agreeable: cafés, music performances, an audio store (whose shopkeeper is played by Davies himself), an amateur television station stuck in the analog past, a shop selling musical antiques, and so on. These disparate encounters segue into one another dreamily, offering less narrative than landscape, a generational milieu specific to the film’s own conditions of production, situated within an upper-middle class of liberal intellectualism and sheltered, almost, from culture unfiltered through the latter’s discursive lens. Instead of antagonising this bourgeois consciousness as more grating works of mumblecore might (a form of bougie “wokeness” in its own right), Davies appraises its landscape with the placidity of still life, gracefully unveiling a sonic rhythm that implants itself both thematically and stylistically into the film’s beating heart. Sounds of nature — birds, waterfalls, trees rustling — percolate along Cas’s leisurely strolls and bicycle rides, whereas sounds of civilisation, even more variegated, cultivate beyond the wit of dialectical inquiry an appreciation for the potential of such inquiry. Cas and two of her friends converse on the historical import of music as an ideological tool for Christianity; they explore instrumental acoustics together, overlaying environmental recordings with experimental notes, prefiguring the symbiotic relationship between the two that comes to light eventually.

The discovery of a rare musical antique — a hurdy-gurdy, hand-cranked to operate — and a collection of cassette tapes within one of its compartments sends Cas down a path of exploration, seeking to track down the origins of both objects across the geographical and historical terrains of the city. Visiting the television station, nestled among dense greenery and out of civilisation’s sight, she uncovers a persistent tradition of preserving the traditionally obsolete, continuing to receive and broadcast low-resolution analog from the ’90s. “Recorded snow on analog TV”, the owner proudly gestures towards a screen of blinking static. Back home, the mysterious tapes equally inspire and frustrate Cas’s attempts to decode them. Unknown symbols litter their tiny surfaces, resembling the runes of some bygone lore or cryptic Freemason code; the tapes themselves comprise discordant noises of static and crackling bass, with hints of electric and grunge riffs articulated within. Listening to them on loop yields no satisfying response, and only as Cas progresses deeper with her excavation of their origins via a physical (and possibly metaphysical) odyssey around her surroundings does she venture closer to the destination, or asymptote, of narrative and myth respectively.

In this second half of Topology of Sirens Cas visits a neighbouring island, ostensibly in continued pursuit of the signifiers revealed through her odyssey; but it isn’t she who returns. Instead, two young women, clad in strangely antiquated clothing, appear before us as the subjects of our inquiry: the titular sirens, sculpted from the liminal boundaries between land and water, nature and narrative; one designated as scribe, the other as eye. Making their way back to the mainland, they observe and interpret this new world around them, each new and unknown phenomenon recorded by their watchful eyes. Our camera, similarly, captures this freewheeling rupture, in direct contrast with the meticulously framed and guarded shots afforded to Cas; the sirens predicated on pure experience, as tabula rasa for the modern cityscape, reconstructing its skyline, against Cas’s predominantly rational background (appraising her sonic mystery through paradigmatic lenses of aesthetics, history etc.) which nonetheless accommodates the central role of experience in deconstructing this same skyline.

The sirens appear to possess a historical specificity that, in some way, would betray their appearance as independent, innocent signifiers conjured as an answer, or partial answer, or conduit, or even further question, to the puzzle at hand; a preceding sequence illuminates an art collection and its paintings, chief among which lies Frederick Stuart Church’s The Sirens, similarly of two women, their relationship ambiguous, possibly convivial or antagonistic. And in some way they aren’t: while the film denotes them as figures from a seemingly atemporal figment of magical realism, their ontological origin could be traced to, if not the romanticism of Church’s early 20th-century pre-modernism, then the romanticism of the present day in identifying and interpreting the former. Implanted deep within its contemporary aesthetic nodes of both pastiche and parody, Topology of Sirens remains cognizant, and without pretense, of the circularity that necessarily ensues in unearthing the bedrock of an inescapable history, both general and contextual, of meaning-making itself.

And what of sound? Back to the concept of the topological, of both immutability and variability, the deceptively opaque mystery in Topology of Sirens in fact conceals a transparency eluding detectives and analytics; that despite its enigmatic designs, the narrative’s crux remains remarkably straightforward, whose specifics and legends may vary, whose locations and sounds may change, but whose journey, whether for Cas (and us) looking back through time, or for those looking ahead as pioneers and visionaries, speaks to a universal propensity to discover, forge, impose meaning. Among the juxtaposition of classical and modern music, or of natural and artificial sounds, or of the invisible traces of sound conjured by the image of a place, Davies insists, despite these multi-pronged concerns and rich thematic threads, on nothing more than the very embarking on a topology of sound; appreciating against the current’s fixation on visible images the hidden aural worlds of the world. Just as history placed great significance on the religious dimensions of organ music as invocation of higher deities, Topology of Sirens seeks in a way to reclaim the possibilities of myth-making where myth has seemingly been relegated to outdated dogmatism or artisanal curios. Are the sirens the product of an imagination, fertilised by the many excursions into sound undertaken by Cas? Davies refuses to answer that question. But unlike the image, sound is never discrete, only continuous; one rarely listens to a note’s split-second in lieu of its larger piece. And serving as the film’s connective tissue, the siren’s song enchants and enthralls regardless of space and time. A baseball pitch, initially barren, bears the imprint of its players when Cas sits from afar, listening to the recording of a game. The rules of the game are artificial, yet beautiful and appreciated by all. How lovely it is, later, when she watches a live game, renewed by this experience of sound, this little reminder of beauty that blooms in the act of quiet contemplation. 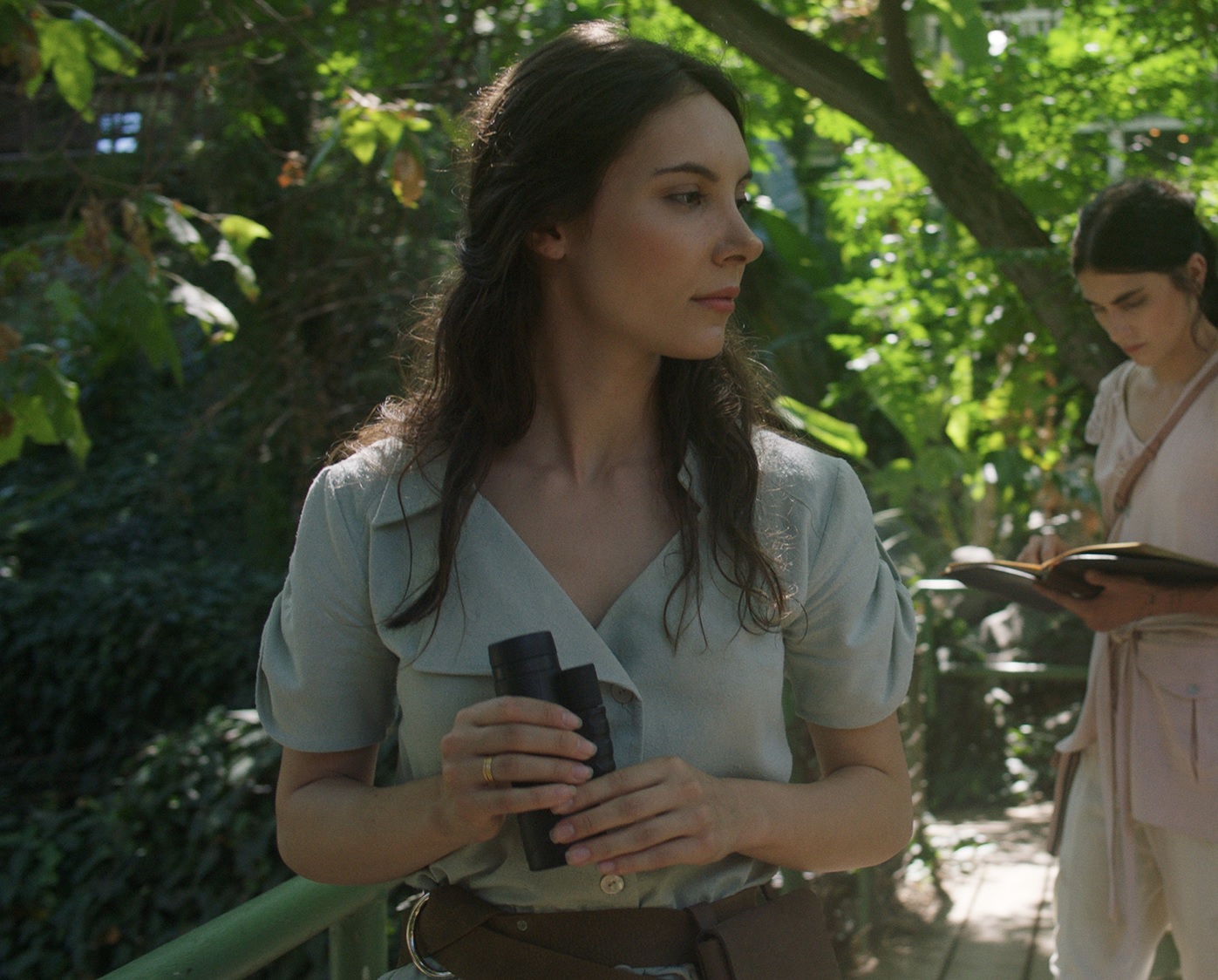